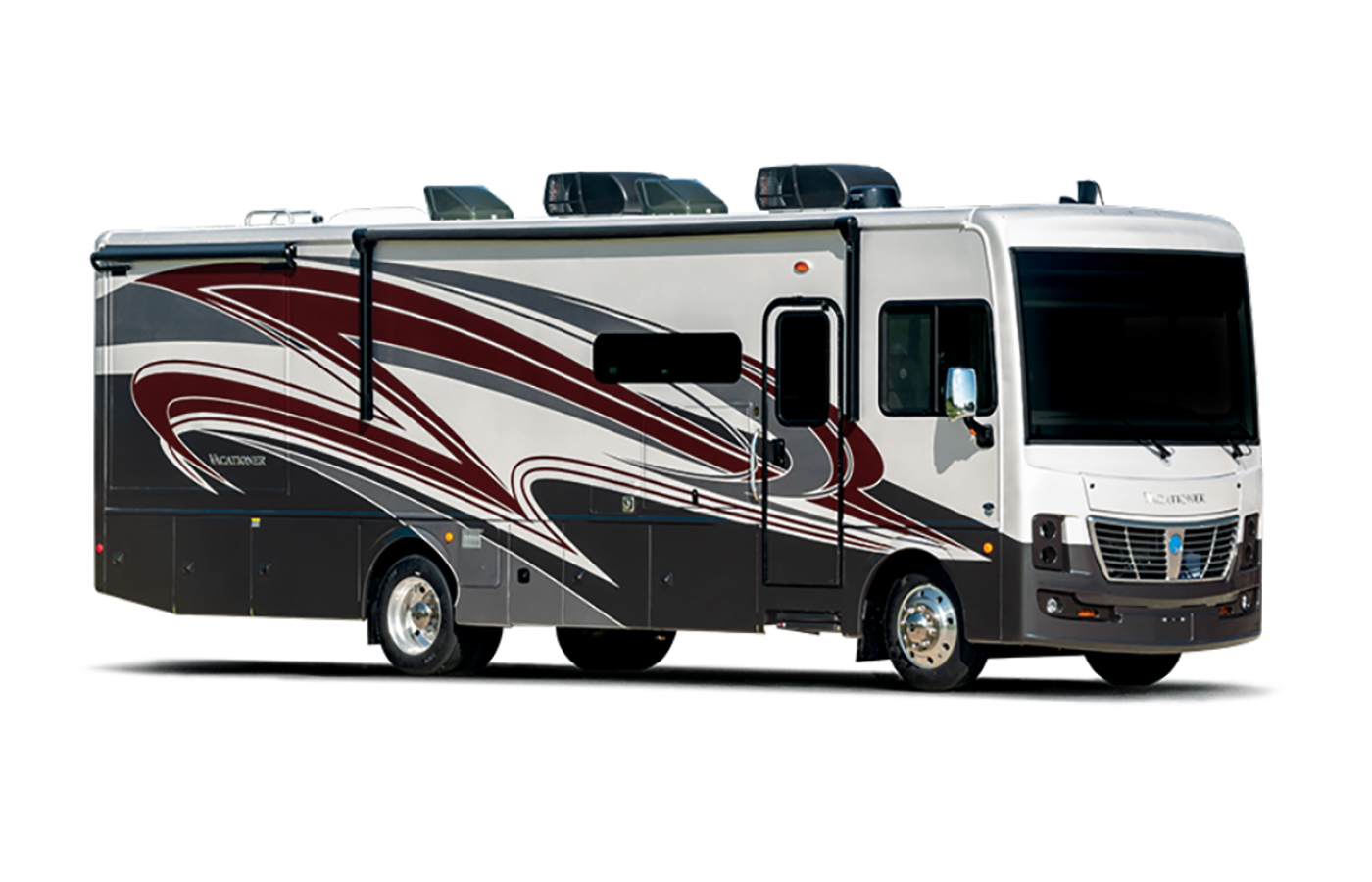 This February, the Holiday Rambler brand has assembled a collection of sites, monuments, and museums throughout the United States that recognize and commemorate significant Black leaders, historical sites, and poignant places.

The roots of Black History Month date back to 1915 when an organization dedicated to promoting achievements by Black Americans declared the second week in February Negro History Week. More than 60 years later, the original week expanded into Black History Month when President Gerald Ford officially recognized it in 1976.

For those planning a Black History Month road trip, traveling in a “home on wheels” makes things easier and more convenient. Holiday Rambler RVs are known for their superior functionality and luxury design amenities that allow travelers to explore far and wide with confidence and in comfort.

One of the brand’s signature motorhomes is the 2022 Vacationer®, a Class A Gas motorhome with three models that range from 34’ to 39’ and are built on a Ford Chassis. While the Vacationer is shorter in length, it’s designed to impress. The 36F model (pictured below) sleeps up to eight with a sleeper sofa, king bed, bunk beds that convert into a seating area, and an optional Hide-A-Loft drop down queen bed. Other sought-after amenities include two full baths, electric fireplace, stainless steel appliances, three-burner cooktop, master bedroom suite, and three LED TVs, including an exterior entertainment center.

Holiday Rambler is a Class A RV brand within REV Recreation Group, Inc., which is a subsidiary of REV Group®, Inc.

Please note: While each activity has been researched, be sure to confirm hours of operation, advance ticketing requirements, and other relevant details ahead of time.

For those who can dedicate a week or longer to Black History Month exploration, the U.S. Civil Rights Trail is the place to start.

Established in 2018, the Civil Rights Trail preserves the history of the Civil Rights Movement in the 1950s and 1960s. The trail crosses 14 states and Washington, D.C., and connects more than 100 landmarks and historical sites, including: the Mississippi Civil Rights Museum in Jackson; the Edmund Pettus Bridge in Selma, Alabama; the locations of sit-ins across the South; and the Supreme Court in Washington D.C. The trail website contains a wealth of information and features an interactive map, along with detailed itineraries by state.

The nation’s Capital is home to several significant sites, including the Dr. Martin Luther King, Jr. Memorial. The centerpiece of the memorial is a commanding 30’ granite statue, known as the Stone of Hope, that pays tribute to the Civil Rights leader. King is the first African American honored with a memorial on or near the National Mall and only the fourth non-President to be memorialized this way. The outdoor site is free and open 24 hours a day. Nearby on the steps of the Lincoln Memorial, find the spot where King gave his iconic “I Have a Dream” speech.

Occupying a prominent location next to the Washington Monument on the National Mall in Washington, D.C., the nearly 400,000-square-foot National Museum of African-American History and Culture is the nation’s largest and most comprehensive cultural destination devoted exclusively to exploring, documenting, and showcasing the African American story and its impact on American and world history. The museum features more than 36,000 artifacts with collections on African American music, literature, photography, and more.

The National Portrait Gallery houses iconic images of Black Americans, from a painting of Lena Horne to an antique photograph of Frederick Douglass. Be sure to check out the official portrait of President Obama in the America’s Presidents gallery and the official portrait of former First Lady Michelle Obama in the 20th Century Americans gallery. Both paintings were done by African American contemporary artists.

Arlington National Cemetery is a moving tribute to some of our country’s bravest and brightest men and women, including Medgar Wiley Evers. Evers, an American Civil Rights activist and World War II veteran, was assassinated in 1963 and is buried in Section 36, Grave 1431. The cemetery is home to many other important and prominent Black Americans, including the “Buffalo Soldiers,” U.S. Supreme Court Justice Thurgood Marshall, and Hazel W. Johnson-Brown, the first African American woman to attain a general officer rank in American military history.

RVers can spend the night at Cherry Hill Park.

Atlanta was the birthplace of Dr. King and it is also the final resting place of the iconic leader and his wife, Coretta Scott King. Visitors can spend two full days in the city touring King’s birth home, visiting Ebenezer Baptist Church where King was a minister, paying their respects at his tomb, and exploring two significant museums.

The National Center for Civil and Human Rights is a museum and human rights organization that aims to inspire people to tap into their own power to change the world around them. The Center’s exhibitions feature the papers and artifacts of King, the history of the U.S. Civil Rights Movement, and stories from the struggle for human rights around the world.

Each year, nearly a million people make the pilgrimage to The King Center to learn of and be inspired by Dr. King. The King Center is dedicated to educating the world about his life, legacy, and teachings. The center’s archives house the largest collection of primary source materials on King and the American Civil Rights Movement in the world. The archives also include more than 200 oral history interviews with King’s teachers, friends, family, and peers.

RVers can spend the night at Atlanta South RV Resort.

Unfortunately, Memphis is infamous as the city where Dr. King was killed. The Lorraine Motel balcony, the place where King was assassinated in 1968, serves as the backdrop for The National Civil Rights Museum. Through interactive exhibits, historic collections, dynamic speakers, and special events, the museum offers visitors a chance to walk through history and learn more about a tumultuous and inspiring period of change. The Mason Temple Church of God in Christ is part of the museum and is the place where King delivered “Mountaintop,” his last speech.

Based in Nashville, the National Museum of African American Music celebrates the role Black Americans played in helping create the American soundtrack. The museum houses a collection of music created and inspired by African American artists. On any given day, guests can join an intimate chat with an artist or industry leader while taking in dozens of interactive exhibits.

RVers can spend the night at Graceland RV Park & Campground near Memphis or Elm Hill RV Resort near Nashville.

For many, Detroit was the last stop on the Underground Railroad. The Second Baptist Church of Detroit provided a safe place for approximately 5,000 people who were enslaved, offering food and rest before they crossed the Detroit River into Canada and freedom. Tours of the church and its exhibits are provided by members of the Detroit Underground Railroad Historical Society.

The Henry Ford Museum of American Innovation is home to the bus where in Montgomery, Alabama, Rosa Parks refused to give up her seat and changed the course of history. Nearby is Greenfield Village, a living history outdoor museum that includes a recreation of the Missouri slave cabin where famous botanist and inventor George Washington Carver was born as well as the actual dwellings of two slave families from the Hermitage Plantation near Savannah, Georgia.

RVers who visit Detroit after April 15 can spend the night at Hass Lake Park when the resort reopens for the season.

REV Recreation Group, Inc. is a REV Group®subsidiary and a leading manufacturer of Class A Gas and Diesel recreational vehicle brands. This company has one of the best and longest standing distribution networks in the industry and boasts some of the industry’s most recognized and iconic brand names such as American Coach®, Fleetwood RV®, and Holiday Rambler®. Headquartered in Decatur, IN, which is also its principal manufacturing location, it operates two state-of-the-art service and repair centers and a genuine parts online warehouse.

REV Group® companies are leading designers and manufacturers of specialty vehicles and related aftermarket parts and services, which serve a diversified customer base, primarily in the United States, through three segments: Fire & Emergency, Commercial, and Recreation. They provide customized vehicle solutions for applications, including essential needs for public services (ambulances, fire apparatus, school buses, and transit buses), commercial infrastructure (terminal trucks and industrial sweepers), and consumer leisure (recreational vehicles). REV Group’s diverse portfolio is made up of well-established principal vehicle brands, including many of the most recognizable names within their industry. Several of REV Group’s brands pioneered their specialty vehicle product categories and date back more than 50 years. REV Group trades on the NYSE under the symbol REVG. Investors-REVG