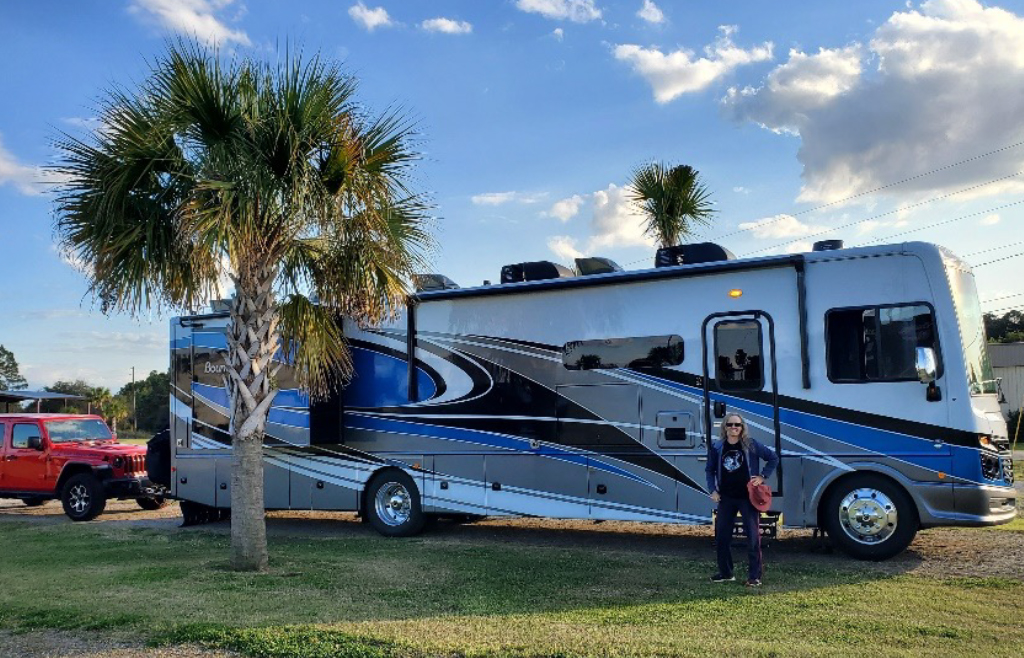 In 2021, after a two-decade hiatus, John and Mitzi Platillero of Knoxville, Tennessee, bought their second RV. They purchased a 36F Bounder® from Fleetwood RV® for two significant reasons. It’s the model they originally owned when their children were young, and they have wonderful family memories of traveling down South and through the Midwest. In addition, it’s a model that’s easily accessible for their adult son David who is partially paralyzed from the waist down. David has just enough leg strength to walk short distances and alternates between forearm crutches and sometimes walking without assistive devices, depending on the situation and environment.

This spring and fall, the Bounder, driven by John and co-piloted by Mitzi, will take David on a tour of high schools throughout Tennessee so he can talk about the dangers of distracted driving and spread his message of forgiveness and moving forward.

In 2016, David was attending Blackbird Academy in Nashville to pursue music engineering when he was hit by a distracted driver while on his bicycle. He was left paralyzed but through intense physical therapy and determination was able to regain partial use of his legs. In 2019, David released his first album “Lionheart”. In addition, he has appeared on American Idol as a competitor and on the ELLEN Show to share his story.

For David, the Bounder is easy to access since it has an open floor plan, and all the necessities are conveniently located. The dinette table is flush against the wall so there’s no need to maneuver around it. The kitchen is located up front and there’s a bathroom and sleeping area in the middle of the model. David and Kristi, who sing together, have already used the Bounder. The couple sang at a wedding in Miami, so John and Mitzi rendezvoused with them. They all stayed in the RV and shared a long weekend together.

The Platilleros are an RV and music-loving family. In fact, it was a love of music that drove the purchase of their first motorhome.

Back in the ‘90s, John and Mitzi bought a Fleetwood RV Bounder so they could easily take their two young children to music festivals. And, while John originally started his professional life as an electrical engineer, after a few years he began promoting concerts in their hometown of Knoxville. That meant family vacations were spent traveling in their Bounder, attending concerts, and festivals to scout for new bands.

In 1997, John decided to enter the music business full time, so the couple sold their Bounder to raise cash to help fund the fledgling endeavor.

“I was sad to see it go. Our RV had opened our world to exploration,” said John. “It contained so many memories of our young family that were really special.”

Fast forward to 2022 and John, who is 60, just sold EventBooking, the global business he and Mitzi founded in 1997.

“In late 2020, I started to think about getting an RV again but was nervous to share my idea with Mitzi,” said John. “I had my rationale all laid out: deepen our relationship; entertain other couples; take weekend trips with our grandkids; and travel with our son David and his wife Kristi. With a potential business exit on the horizon, it was the perfect time.”

Mitzi was quickly onboard, and the couple began their search. While they looked at various models, they kept gravitating back to a Bounder because it had been part of their early years.

The Platilleros zeroed in on the Bounder 36F since it was accessible for David, had bunk beds for their grandkids, and provided two full bathrooms for traveling with other couples. When not in use, the bunk bed space converts into a closet and seating area.

Since RVs are in demand, they put their names in with a few different dealers and were surprised to get a call from one right in their own backyard. Camping World in Knoxville contacted them to say they had received a 36F in that morning. The couple immediately headed to the dealership to put down a deposit.

John and Mitzi first hit the road in January 2021 in their new Bounder for a trip to Florida where they met up with David and his wife Kristi.

“We have great conversations when we’re on the road. We’re rediscovering each other and making new, adventurous memories together,” said John. “And, we’re learning to play Pickle Ball because when you visit Florida you can’t avoid it.”

In addition to David’s tour of high schools, the couple’s travel goal is to visit all 48 states and take their grandchildren on weekend explorations.

“With our old Bounder, we visited the East Coast, Southeast and local campgrounds,” said Mitzi. “We’re now planning a big trip out West where we’ll be gone for two to three months and hit a lot of national parks like Arches, Zion, Yosemite, and Yellowstone. We’d also like to spend time in the Dakotas and Northwest since we haven’t been to those areas before.”

While the Platilleros owned an RV previously, there’s still a learning curve.

For example, one morning it was cold, so John turned on the defrost, which he had never used before. It was set to recirculate, and consequently the windshield quickly fogged up. The couple now joke about checking that instrument setting before they start driving in the morning.

“This new Bounder came with REV Assist, which is something we really like,” said Mitzi. “For one year, we can call and get help anytime we need it. We’ve used it for things on the Bounder we didn’t even know how to do and that’s been very helpful for us.”

Fleetwood RV is a brand within REV Recreation Group, Inc. a subsidiary of REV Group, Inc. The Bounder is a Class A Gas RV and has the distinction of being one of the best-selling motorhomes ever.

Fleetwood RV recently introduced its 2022 Bounder 35GL. The 35GL is a Class A Gas luxury motorhome with an innovative, industry-leading floorplan that delivers ultimate comfort and convenience for travel-loving couples and families. With its mid-coach entry, the 35GL is spacious, inviting, and features four distinct areas, making it feel like a traditional home.

REV Recreation Group, Inc. is a REV Group® subsidiary and a leading manufacturer of Class A Gas and Diesel recreational vehicle brands. This company has one of the best and longest standing distribution networks in the industry and boasts some of the industry’s most recognized and iconic brand names such as American Coach®, Fleetwood RV®, and Holiday Rambler®. Headquartered in Decatur, IN, which is also its principal manufacturing location, it operates two state-of-the-art service and repair centers and a genuine parts online warehouse.

REV Group® companies are leading designers and manufacturers of specialty vehicles and related aftermarket parts and services, which serve a diversified customer base, primarily in the United States, through three segments: Fire & Emergency, Commercial, and Recreation. They provide customized vehicle solutions for applications, including essential needs for public services (ambulances, fire apparatus, school buses, and transit buses), commercial infrastructure (terminal trucks and industrial sweepers), and consumer leisure (recreational vehicles). REV Group’s diverse portfolio is made up of well-established principal vehicle brands, including many of the most recognizable names within their industry. Several of REV Group’s brands pioneered their specialty vehicle product categories and date back more than 50 years. REV Group trades on the NYSE under the symbol REVG. Investors-REVG